Last May Columbia University Press published my new book Fear of Breakdown: Politics and Psychoanalysis. Last month I learned that it is has won the 2020 Courage to Dream Book Prize by the American Psychoanalytic Association for the book that best promotes the integration of the academic and clinical worlds of psychoanalysis. My book is picking up that honor this coming Thursday at the APsaA national meeting in New York. There is also a session on the book from 2-4 that afternoon.

Last month the American Philosophical Association honored my book with a session with commentaries by Robyn Marasco and David McIvor.

So I am delighted and honored by all the accolades. But mostly this is a book about our times, trying to make sense of them, trying to understand how we got here, and what we all, just regular folks, can do. There is plenty. The CUP blog has a piece on this. You can read it here.

The key practices I suggest are these:

This way of approaching politics calls for a change in our attitudes both to problems and to each other. Where a politics bent on avoiding destruction splits the world into good and evil, a politics of working through anxieties calls for seeing shades of gray, nuances, and ambiguities.

I just quit Facebook today. It wasn’t that big a part of my life but now that I’ve quit it I realize how much of my cyborg life it was. Just like my phone. I might not use it that much but it is always there. And now FB no longer is, not the scores of people from my adolescent years, not the students and colleagues from my 30s, not my more recent friends from greater DC and Boston, not my current philosophy colleagues from all over the world. Facebook made it possible for me to have all these great connections, just as it made it possible for it to scoop up private data from 31 percent of the global population. Yes, 31 percent. And then monetize us, harvest us, market to us, capture us for whatever they want. So I decided finally, after much prodding from a few friends, to say, no. No more. I have found an alternative to Facebook that promises not to sell my data, not to algorithmize my content, to just let me share my news with people I like. Maybe this is a fantasy that somehow I can keep my personal stuff to myself. But I’m okay with better being a good alternative to unacceptable.

What is so curious is that so many of my otherwise principled friends and colleagues are willing to scoop up the benefits of Facebook and turn a blind eye to the harm it is doing.

I’m giving a short talk at the upcoming Movie Mania event, hosted by the Emory University Psychoanalytic Institute: a screening of Yorgos Lanthimos’ 2018 award-winning movie The Favourite on Saturday, Nov 23rd, 4 pm, at White Hall 203 on the Emory University campus. You can find a trailer for the movie here.

Likened to a punk Restoration dark comedy, Yorgos Lanthimos’s film, The Favourite, features the triad familiar to psychoanalytic theory. But instead of the Oedipal triangle where the father holds the whip, here is a triangle of women acting out their sado-masochistic fantasies: Sarah, the Duchess of Marlborough; Abigail, the Baroness Masham; and Anne, the Queen of three nations vying for their own resolutions, England, Scotland, and Ireland. From the music to the costumes, to the cinematography, the film overflows with envy, seduction, torment, and rivalry. But who is seducing whom? And is there any resolution to be had from this triangle?

The Goodrich C White Hall is located at 301 Dowman Dr. Atlanta, GA 30322. The location is wheelchair-accessible, and there is plenty of free parking available on campus. Take a look at these webpages for more detailed parking information:

The screening is free and open to everyone. Please forward information about this interactive event to your friends, colleagues and family!Questions? Write to samia.vasa@emory.edu or stephanie.koziej@emory.edu.

The venerable Emory University Woman’s Club has invited me to give a talk on my new book, Fear of Breakdown: Politics and Psychoanalysis, at their October 22 meeting, 10 a.m., in Emory’s Houston Mill House. The event is free and open to the public.

On the occasion of Jürgen Habermas’s 90th birthday, the Los Angeles Review of Books published a section of articles commemorating the occasion. I’ve got a piece there, “The Public Sphere in Dark Times.” Here’s snippet:

To my mind, the big question hovering over Trump’s presidency is whether a democratic public sphere can check the power of an authoritarian president and his administration or, conversely, whether an authoritarian administration dismissive of fundamental principles of justice can turn the entire country into a fascist state. So far it seems that, yes, this administration can cause great suffering and hardship, it can reverse decades of progress on environmental and social justice issues; but it seems that it cannot, under current conditions, muzzle public opinion or its power. These current conditions include a free press, spaces for public opinion to form and be shared, strong habits of public expression and contestation, and means for those who have been silenced or marginalized to enter the public fray.

Even in dark times, I am an optimist. Other pieces in LARB’s “Habermas Dossier” include pieces by Martin Jay, Maria Pia Lara, Matthew Specter, Matthias Fritsch, Martin Woessner, and Eduardo Mendieta.

This past June (2019) I helped put on a small conference in Rethymnon, Crete, Greece titled “Thinking Through Crisis: Psyche, Society, and Politics.” This invitation-only meeting brought together philosophers, political economists, and other theorists to think about the roots of many contemporary problems, from the rise of nationalism to the Greek debt crisis. We may put together a volume from this, but in the meantime here’s the line up.

Fear of Breakdown: Politics and Psychoanalysis, Columbia University, May 2019.

LINKS TO SOME OTHER OF TEXTS:

“Acting Politically in a Digital Age,” in in From Voice to Influence: Understanding Citizenship in a Digital Age, eds. Danielle S. Allen and Jennifer S. Light, University of Chicago Press, 2015. 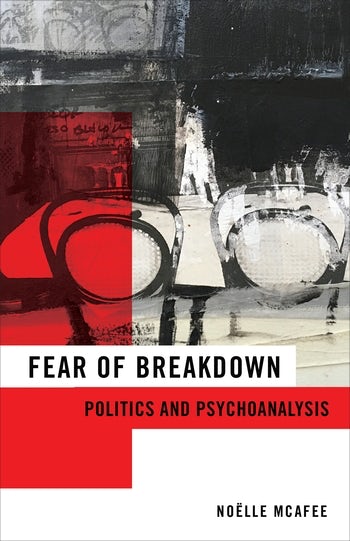 In exploring the fear of breakdown that underlies human existence, McAfee creates a genuine intellectual breakthrough—her book is a stunningly original exploration of the political significance of mourning. This is one of the most thrilling books I have read in years.Mari Ruti, Distinguished Professor, University of Toronto

You can preorder it here.

I’ve been authoring an entry in the Stanford Encyclopedia of Philosophy since 2009. I update it every few years. Beginning with this most recent update, published this past week, I’ve got a new co-author, Katie B. Howard. Below is a snippet of our entry. Or go here for the whole thing.

While feminist philosophy has been instrumental in critiquing and reconstructing many branches of philosophy, from aesthetics to philosophy of science, feminist political philosophy may be the paradigmatic branch of feminist philosophy because it best exemplifies the point of feminist theory, which is, to borrow a phrase from Marx, not only to understand the world but to change it (Marx and Engels 1998). And, though other fields have effects that may change the world, feminist political philosophy focuses most directly on understanding ways in which collective life can be improved. This project involves understanding the ways in which power emerges and is used or misused in public life (see the entry on feminist perspectives on power). As with other kinds of feminist theory, common themes have emerged for discussion and critique, but there has been little in the way of consensus among feminist theorists on what is the best way to understand them. This introductory article lays out the various schools of thought and areas of concern that have occupied this vibrant field of philosophy for the past forty years. It understands feminist philosophy broadly to include work conducted by feminist theorists doing this philosophical work from other disciplines, especially political science but also anthropology, comparative literature, law, and other programs in the humanities and social sciences.

My entry on Julia Kristeva has just been published in the Routledge Encyclopedia of Philosophy. Here’s a snippet:

Born in Bulgaria in 1941 and an emigré to Paris in 1965, Julia Kristeva is a world-renowned philosopher, novelist and practising psychoanalyst. Author of more than 30 books and a professor emeritus at University of Paris VII–Denis Diderot, she has been awarded Commander of the Legion of Honour, Commander of the Order of Merit, the Holberg Prize, the Hannah Arendt Prize and the Vaclav Havel Prize. Her early work, Revolution in Poetic Language (1974), distinguished her as a major poststructuralist thinker, especially for its new ways of conceiving of the speaking being as one who is always subject to the revolutionary power of the affective dimensions of language, that is, the semiotic dimension, which, with the symbolic dimension, produces signification. In her major works of the 1980s – Powers of Horror (1980), Tales of Love (1984) and Black Sun: Depression and Melancholia (1987) – she developed new psychoanalytic theories of early development which gave ‘the maternal function’ a central role that had been neglected by previous psychoanalytic theories. Kristeva is also the author of numerous works of fiction, mostly detective novels with female protagonists, in which she tries to exemplify some of her theoretical ideas. These include The Old Man and the Wolves (1994), Possessions: A Novel (1996) and Murder in Byzantium(2006). Over the past 20 years she has turned to intellectual biography with the trilogy Female Genius: Hannah Arendt (1999), Melanie Klein (2000) and Colette (2002); and more general social theory with Hate and Forgiveness (2005) and The Incredible Need to Believe (2009). She has also continued her inquiry into revolt with books on the importance of self-reflection, critical questioning and inquiry in works such asProust and the Sense of Time (1994), Intimate Revolt (1997) and the essay, ‘New Forms of Revolt’ (2014).